Travel to Skiathos with us

Skiathos is a small island located in the northwest of the Aegean Sea that that is popular with visitors from across Europe.

The green island is well visited by those who want to embrace the scenic beauty that awaits, with stunning countryside and a number of impressive beaches that are perfect for topping up the tan.

The ability to catch some rays is helped by the islands climate, which is particularly good during the summer season. From June through to August, average temperatures will hit the high 20s to early 30s with plenty of sun and little by way of rain.

The green backdrop of the forests sits alongside white sandy beaches , with more than 50 spread across the coast. Those towards the south near the main tourist areas tend to be busier, with more peaceful offerings to be found further north.

Regardless of where you head, you’ll be able to take a refreshing dip in clear blue waters that could almost be straight out of the Caribbean.

Lalaria Beach is one that is particularly scenic, albeit only accessible on a boat trip, thanks to its imposing limestone cliffs and a huge natural arch formed by erosion of the stone.

Skiathos Town and Koukounaries are just two of the popular resorts on the island, the latter being home to a large lagoon that is split from the sea by a pine forest. 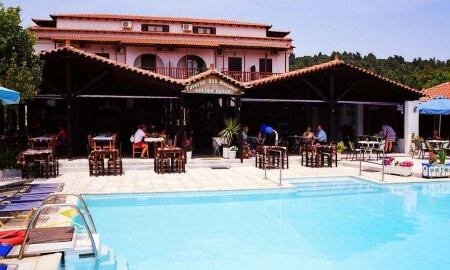 Located on the south-western corner of Skiathos, the Golden Beach Hotel is just 6 minutes from Koukounaries beach. The famous Banana beach is only 5 minutes’ drive from the hotel....