Travel to San Francisco with us

Colourful and cosmopolitan are just two words often used to describe San Francisco, which remains one of the must-see destinations for anyone taking a HOT Holiday on the western coast of the USA.

The City by the Bay is hugely popular with those who want to take in the many and varied sights that have made San Francisco famous around the world.

Although the weather might not be the key selling point when it comes to deciding where to head in the USA, it’s worth bearing in mind that San Francisco can be more seasonal than some of the other big cities.

Summer and autumn is when temperatures will be at their warmest, breaking into the 20s, although things will get noticeably cooler in winter when it might only just reach double figures and there is more chance of rain.

No matter what the weather is like however, the vibrant and friendly atmosphere that awaits those who visit San Francisco is something that is assured throughout the year.

Board one of the famous old cable cars that climbs the steep streets of the city and you’ll be able to head off and explore the sights at leisure.

From the shops around Union Square to the grand mansions of Nob Hill and from the historic French quarter to the largest Chinatown to be found outside Asia, San Francisco is a city that rewards those who love to explore.

You’d also do well to head down to the waters of the bay where you can visit Fisherman’s Wharf or book a trip out to the famous prison of Alcatraz or to Angel Island.

The spectacular Golden Gate Bridge, an instantly recognisable symbol of the city, should also be visited, with a walk across the bridge giving the chance to take in views over the bay – assuming the trademark fog hasn’t paid a visit.

The island of Alcatraz is home to one of the most famous prisons in the world, which housed some of America’s most dangerous prisoners until 1963. Located around 2km off shore of San Francisco, it was said that no-one would be able to escape from the prison, with no evidence to suggest that any of those who attempted were successful. Having been closed due to rising costs and the deteriorating condition of the buildings, the island – now on the Register of Historic Places – is a popular attraction with tourists who take tours of the abandoned prison and the various other buildings that are located on the island.

The famous cable cars of San Francisco have been in operation since the 1870, with three of the earliest lines still in operation to this day. No trip to the city would be complete without taking a ride on the network that travels across San Francisco and provides one of the best ways to take in the sights.

The Golden Gate Bridge is one of the most iconic symbols in the USA, and arguably the first thing that springs to mind for many people at the mention of San Francisco. Linking the city to Marin County, the bridge opened in 1937 and is a popular draw for tourists who can either walk or cycle from one side to the other and admire views over the strait that links San Francisco Bay with the Pacific Ocean. There is also a visitors centre that tells the story behind the bridge.

Fisherman’s Wharf is a popular waterside area of San Francisco, which is home to a number of tourist attractions, including a variety of top quality seafood restaurants and a selection of museums. One of the man draws in the area is Pier 39, which is home to a colony of sea lions that arrived in the docks from the nearby waters in 1989 and have been present ever since.

San Francisco is famous for its hills but there are few to match Lombard Street. Known as the ‘crookedest street in the world’, the street features a stretch of switchbacks that were put in place to try and reduce the natural gradient of the hill, but it still so steep that traffic is limited to just 5 miles an hour. A walk to the top is enough for even the fittest person.

Golden Gate Park is a large park that is located near to the Golden Gate Bridge that is a popular attraction for visitors to the city who are looking to escape some of the crowds and head for more peaceful surroundings. There is a wide range of flora and fauna to be found within the park, alongside various statues and fountains. There is also a carousel to keep the children entertained and an aquarium.

The Chinatown area of San Francisco is the largest to be found anywhere outside Asia, and also the oldest in North America. It’s a fantastic place to head to simply walk through the streets and marvel at the many cultural and historical sights, whilst there are also plenty of options when it comes to dining on the very best in Chinese cuisine.

Nob Hill is known to be one of the more affluent districts of San Francisco, which is reflected in the many large buildings that are to be found in the area – with various expansive mansions and some of the biggest and most expensive hotels. There is also a selection of parks for relaxation, with a theatre and the popular Cable Car Museum also nearby. 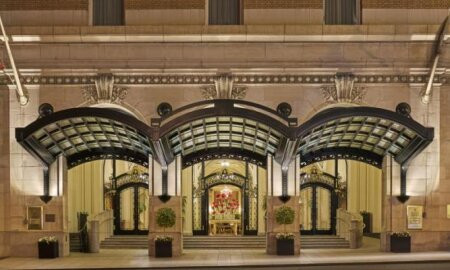 Palace Hotel, A Luxury Collection is a stunning 4 star hotel located in downtown San Francisco. It is full of historic architecture and offers world class service. This iconic hote...

If ever there was a country that was perfect for a road...

Sitting on the western coast, San Francisco is one of t...