Travel to Hungary with us

Hungary might not be the first option that comes into your head when considering where to go on holiday, but the Central European is probably more popular than you realise.

For obvious reasons, Hungary isn’t the place to go if you want to relax on the beach, but the landlocked nation has plenty to offer overseas visitors, particularly amongst those who want to embrace the history and heritage of the country.

Hungary provides visitors with a traditional continental climate, with warm, dry summers and cold winters where the temperature may struggle to break past zero.

Arguably the most popular destination for those heading for Hungarian soil is the capital city Budapest, which has developed into one of the top cities in Europe for a short break.

Alongside various museums, there is the chance to visit the UNESCO World Heritage site that exists alongside the banks of the Danube and the various caves that exist under the city.

The city of Debrecen, second only to Budapest in size, is also a popular destination with visitors from overseas and is home to a selection of historical sites itself.

During a visit to Hungary, you could also head for some of the famous thermal springs that are to be found across the country, while further examples of the natural beauty can be discovered if you head for the area around Lake Balaton; the largest freshwater lake to be found anywhere in Europe.

It is that mixture of nature and history that makes Hungary such a fascinating option for anyone who wants something a little different to the norm, with accommodation options to cater for all tastes.

Whether you want five star luxury of prefer to sleep under the stars in a countryside camp site, there’ll be something to meet your needs.

Split in two by the mighty Danube River, Budapest is so... 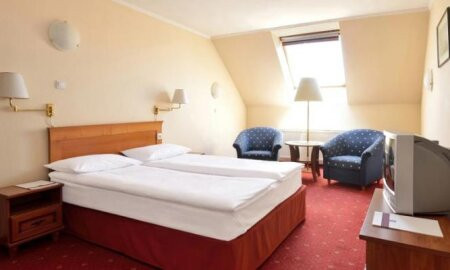 The Atlas City Hotel is a 3* hotel located in the heart of Budapest offering easy access to the many and varied delights of the Hungarian capital. With a number of metro station...